Due to DataStealth's accelerated success, we are hiring! Learn more

To follow up on an earlier communication, PCI SSC is now targeting a Q1 2022 publication date for PCI DSS v4.0. This timeline supports the inclusion of an additional request for comments (RFC) for the community to provide feedback on the PCI DSS v4.0 draft validation documents.

Due to the significance of this revision, a preview of the draft standard will be provided to Participating Organizations, Qualified Security Assessors (QSAs), and Approved Scanning Vendors (ASVs) prior to being finalized for publication. The intent of the preview period is to allow stakeholders additional time to familiarize themselves with version 4.0 of the standard before it is officially launched.

Training for QSAs and ISAs to be able to support PCI DSS v4.0 is targeted for June 2022. 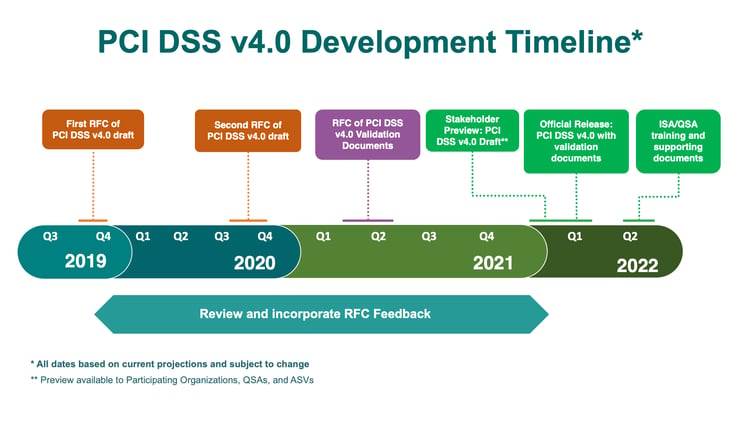 Transition Period
The updated timeline still includes a transition period for organizations to update from PCI DSS v3.2.1 to PCI DSS v4.0. To support this transition, PCI DSS v3.2.1 will remain active for 18 months once all PCI DSS v4.0 materials—that is, the standard, supporting documents (including SAQs, ROCs, and AOCs), training, and program updates—are released.

This transition period allows organizations time to become familiar with the changes in v4.0, update their reporting templates and forms, and plan for and implement changes to meet updated requirements. Upon completion of the transition period, PCI DSS v3.2.1 will be retired and v4.0 will become the only active version of the standard.

Future-Dated Requirements
In addition to the transition period when v3.2.1 and v4.0 will both be active, there will be an extra period of time defined for phasing in new requirements that are identified as “future-dated” in v4.0.

We anticipate that PCI DSS v4.0 will contain a number of new requirements that may be future dated; however, we won’t know the exact number until the standard is finalized.

An overview of the planned transition timeline and potential timing for future-dated requirements is shown below. 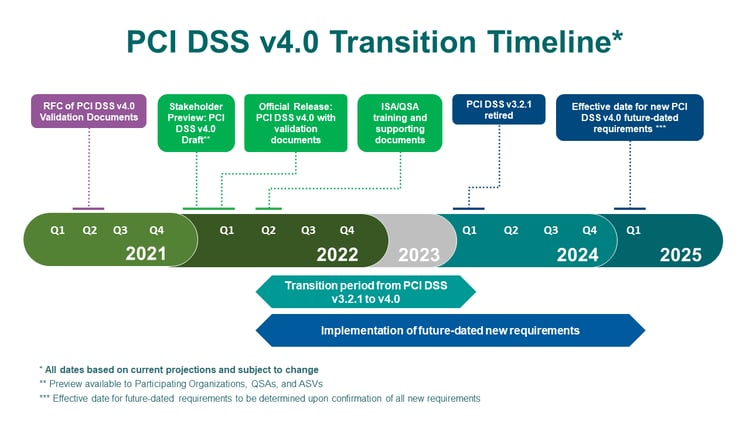 The Council will provide additional information on the PCI DSS v4.0 progress throughout the year.

Subscribe to the PCI Perspectives blog to stay up to date on the progress of PCI DSS v4.0.